You are here: Home › News: Opening Thurs., Sept. 15: ‘Veils’ The Musical Takes Center Stage Reminding Us of The Price Paid for The Freedoms Won and The Women Behind It All | CitizenWire
By Roderick Kinnison on September 12, 2022 in All Stories Index, Entertainment 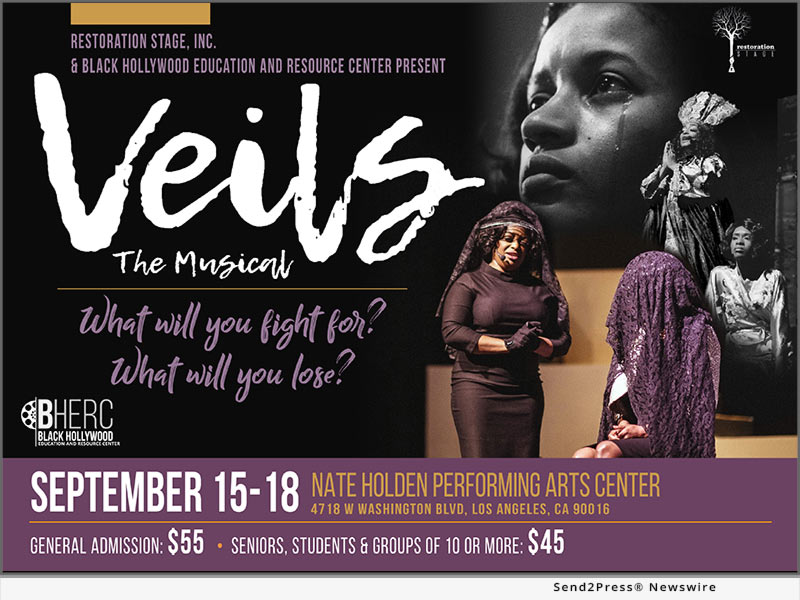 'Gut-wrenching, eye-opening, and inspiring Veils - is a scrapbook, a dream book-a record of women's work' - DCTheatreScene.com

HOLLYWOOD, Calif. /CitizenWire/ -- The Black Hollywood Education and Resource Center (BHERC) has teamed with Restoration Stage (Washington, D.C.) to bring the popular musical "Veils" to the Los Angeles area for a short run Thursday, September 15, and Friday, September 16 at 8 p.m.; Saturday, September 17 at 2 and 8 p.m. and Sunday, September 18 at 8 p.m. at the Nate Holden Performing Art Center in Los Angeles, California. Purchase tickets at https://bherc.org/.

So much has been written about the men lost in the Civil Rights and Black Lives Matter movements. Unexplored, however, are the stories of the women whose lives are affected by these tragedies - the women who wear the "Veils." This musical is described as an emotional historical pageant of grief and resilience that pays tribute to women veiled in mourning, with a focus on Black lives lost in bloodshed during the sixties Civil Rights Movement to gain many of the freedoms we enjoy today.

BHERC believes that "Veils" on its own sends a powerful message of courage and sacrifice. However, as we find ourselves at the precipice of a democracy that is being contested, and the right to vote is being undermined as well as other freedoms, BHERC believes that "Veils" is truly a great example of the price that has already been paid for the gains being threatened. It represents the strong Women, like those who today are standing up and marching for justice.

"We are proud to bring this inspirational and compelling work to Los Angeles for a second time," States Sandra J. Evers-Manly. "The pandemic disrupted the performance in March 2020, but not this time. Everyone must come out to witness this incredible musical. It will inform, energize, and inspire you, with hope for our future as a people."

"The singer-actors have created an exquisitely beautiful experience of enduring sorrow, honor, and healing." - John Stoltenberg

"The surprise is that with Veils two such multitalented African American young men have undertaken this profoundly womanist theme with such deep empathy and authentic respect. This, to my knowledge, is a first in theatre history." - DCMetroTheatreArts.com

"Tackles roles ranging from Sybrina Fulton and Mamie Till to Jacqueline Kennedy and Viola Liuzzo." - The Washington Informer

"I'm thrilled that my mother's story is one being told in this production which brings history to life and light." - Mary Liuzzo, daughter of civil rights martyr Viola Liuzzo

Founded in 1996 by Sandra Evers-Manly, the Black Hollywood Education and Resource Center is a 501(c)(3) nonprofit, public benefit organization designed to advocate, educate, research, develop, and preserve the history and future of Black images in film and television. Through film festivals, award ceremonies, book signings, script readings, contests, scholarships, other programs, and special events, BHERC recognizes the contributions of Black men and women in front of and behind the scenes in the entertainment industry.

About Restoration Stage, Inc. - (Washington, DC) is an independent theatre company. Best known for the original works of its founders, playwright Steven A. Butler, Jr., director/lyricist Courtney Baker-Oliver, and composer Christopher John Burnett, it is a partnership that has yielded the critically acclaimed "The Truth", "All That Glitters", and "Chocolate Covered Ants." The core focus of Restoration Stage, Inc. is to produce innovative theatrical productions with themes that contribute to the ongoing dialogue about how to improve the condition of the family in American society. ​

Our Founders: Courtney Baker-Oliver and Steven A. Butler, Jr. created Restoration Stage, Inc. in May 2005 and serve as Restoration Stage's legal directors. Initially created as a producing entity for Butler's play, "The Truth," it has expanded to include additional projects currently in various stages of development. Since 2005, Restoration Stage has employed the talents of more than fifty performers, designers, technicians, and other support staff to produce its productions. http://www.restorationstage.org

News: Register for CREATE Restaurant Show 2022 in Denver | CitizenWire
News: The Legacy of 9/11 and the Scientology Movement it Inspired | CitizenWire