You are here: Home › News: Church of Scientology Helps Nonprofit Strike Out Against Drugs | CitizenWire
By Roderick Kinnison on June 29, 2022 in All Stories Index 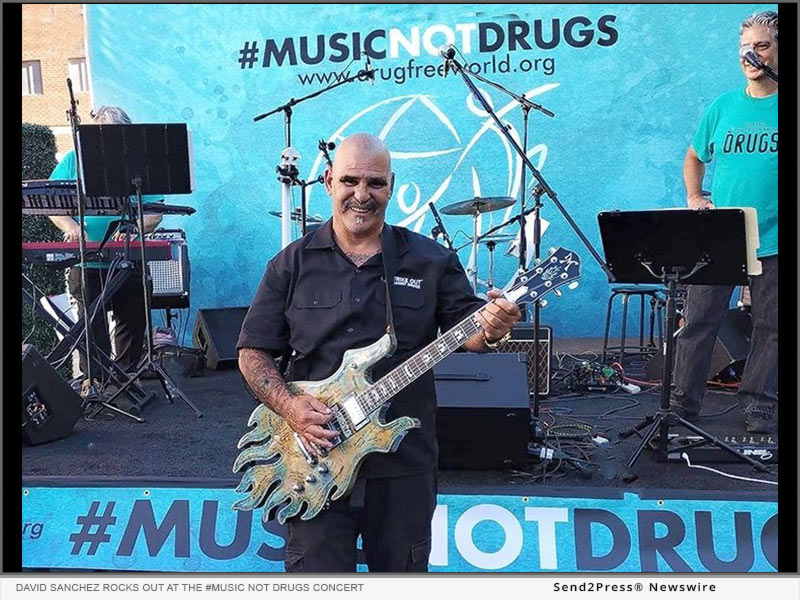 HOLLYWOOD, Calif. /CitizenWire/ -- In the heart of Hollywood, the Church of Scientology Los Angeles joined forces with local nonprofit Strike Out Against Drugs in a musical tribute to drug-free living.

Visitors to the Hollywood Walk of Fame on International Day Against Drug Abuse and Illicit Trafficking were treated to a different kind of rock concert this year. On a stage just outside the Scientology Public Information Center on Hollywood Boulevard, the nonprofit Strike Out Against Drugs organized the concert. And the message of those performing was: Learn the truth about drugs. Because knowing about something that can hurt you is half the battle of being able to defeat it.

Strike Out Against Drugs founder David Sanchez knows what he's talking about when he speaks about the importance of drug education. Introduced to marijuana by a neighbor at the age of 9, he soon progressed to heroin and crystal meth, and from there to a life of crime. By the time he was 18 he was serving time in jail and ended up doing so for a total of 22 years.

When he finally got himself off drugs in 2012, he opened a sober living facility called Beacon of Hope to help former addicts transition to a drug-free, crime-free life.

He and most of the men in his facility started on drugs when they were kids, which is why he is so passionate about reaching kids before they become statistics.

"I had to find an organization that was like-minded, that had the will and the want to get out there and make a change in the community," Sanchez says in an episode of "Voices for Humanity" on the Scientology Network. "Drug-Free World has the facts about drugs, the truth about drugs."

Learning that the Church of Scientology Los Angeles is active with the program locally, he visited the Church and they provided him with all the materials and assistance he needed to get his drug prevention program off the ground.

Sanchez delivers drug education in local schools. And he brings former addicts with him to talk to kids about what drugs are and what they do. "We are real people telling our real stories," he says. And he finds the Foundation for a Drug-Free World's youth-friendly materials get through to kids that the smartest thing they can do is to make the firm decision not to experiment with drugs.

To make his initiative available to anyone, anywhere in and around Los Angeles, Sanchez bought and refurbished a minibus, turning it into a mobile drug prevention theater where he shows the Foundation for a Drug-Free World public service announcements and "Truth About Drugs: Real People, Real Stories" documentary. He parks the bus at events, festivals-anywhere people gather.

To date, David Sanchez has reached over 1.5 million people with its anti-drug message and has changed the lives of countless kids.

"If I can keep one person, one kid, from having that type of lifestyle," says Sanchez, "then I've done my job, and I'm very proud to be able to do that."

Voices for Humanity is a Scientology Network original series of short documentaries introducing changemakers from all faiths, cultures and nations as they extend help to their communities through Scientology-sponsored humanitarian programs.

Music and Recording, Religion and Churches