You are here: Home › Legal Use and Dispensing of Medical Marijuana in New England: First Medical Marijuana School to Open in Warwick
By Roderick Kinnison on July 28, 2010 in All Stories Index, Education, National News 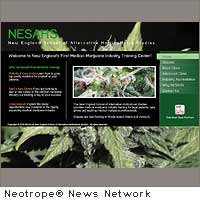 Rhode Island State law allows registered patients or their caregivers to legally set up an indoor grow with a certain number of marijuana plants for personal medical purposes. Unlike similar schools in California and Colorado, the New England School of Alterative Horticultural Studies operates in the north-eastern USA and offers professional medical marijuana training at a fraction of what the cost would be for a north-eastern USA based student.

“Traditionally, someone who lives in the New England area and wants to take this type of MMJ training would have to travel to California or Colorado at their own expense. This is in addition to the tuition costs which make the total cost for these classes quite steep for folks in the north-east United States,” said the school founder, Luis Hernandez. “Now, everyone here in the north-east has access to professional medical marijuana training right in their own back yard.”

Another unique feature of this school is its strong sense of social responsibility. No less than 20% of all class proceeds are donated directly to causes such as AIDS & Cancer research, cannabis law reform, and other worthwhile patient advocacy programs. As stated by Hernandez himself: “Environmental and social responsibility are core values which we take very seriously around here.” The school also extends special discounts to registered patients who cannot afford the full class tuition.

Yet another distinction for the school is having incorporated state law, fire and electrical safety, ethics, confidentiality and professional conduct to the curriculum in addition to the horticultural aspect of a medical marijuana training class.

About the New England School of Alternative Horticultural Studies:

The New England School of Alternative Horticultural Studies is the first vocational training institution in the New England area offering professional medical marijuana training to qualified patients, caregivers and aspiring medical marijuana professionals with operations in Rhode Island, Maine and Vermont. The school was founded by Luis Hernandez in 2010 to address the lack of professional cannabis education sources in the north-east United States.

News Source: New England School of Alternative Horticultural Studies :: This news story was first issued by and is Copyright © 2010 the Neotrope® News Network – all rights reserved. Originally published on CitizenWire™.